If you have ever wondered what star Trek  has to say on the issue of gender, I suggest you check out this video essay.  It is a thorough overview of how Trek has explored gender, language and dehumanisation over the years. As someone interested in such matters, especially how language can be used to dehumanise or other certain people, I found it quite fascinating to realise how much Trek has to say on the subject.  It also goes to  show how complex and articulate online discourse and vidding is becoming..

The time has come for me to wish my brother Luke happy birthday on here once again. I still don’t see enough of him. He’s a very busy man, and I suppose we lead quite separate lives. Yet he should  know that I often think about him,  and of course Yan. Whatever they’re up to, I hope they have a great day. I’d like to remind Luke too that he has yet to carry out his long-term threat to put me in a plastic bag and roll me down a hill.

A couple of days ago Dom mentioned something  to me about seeing a poster for a new Star Trek  film or series  at a bus stop. At first I presumed that he was just talking about Picard, so I thought nothing of it. Shortly after, though, it cropped up again  on facebook, so I decided a Google was in order. And sure enough, two new series are now in the works, as well as  a new film. Although the latter seems like it will be set in the Abramsverse  (ie naff), the series will hopefully be more like the  Trek I  fell in love with as a child. When Enterprise got cancelled I feared we had seen  the last of star Trek; I now see how wrong  I was. Mind you, these more recent incarnations  have a long way to go before they return Trek to it’s TNG/DS9 heyday.

Am I a cultural influencer? I watched something  on the bbc earlier about young millionaires from Wales, most of whom seem to have made their fortunes from fashion or gaming. One, known as Gonth, was a vlogger who seemed to talk inane hyperactive bollocks about  football on Youtube, yet had earned enough money from it that he could afford supercars and big houses. He was known  as a cultural influencer, which made me wonder, am I a social influencer? I have been blogging far longer than  he had been vlogging, and as far as I could tell, my blog entries are probably far more informative than anything he spouts. Does that mean I can call myself a social influencer? More to the point, why don’t I have a supercar (leaving the fact that I can’t drive aside).

Well, who wouldn’t cringe if you were sat next to such obnoxiousness? 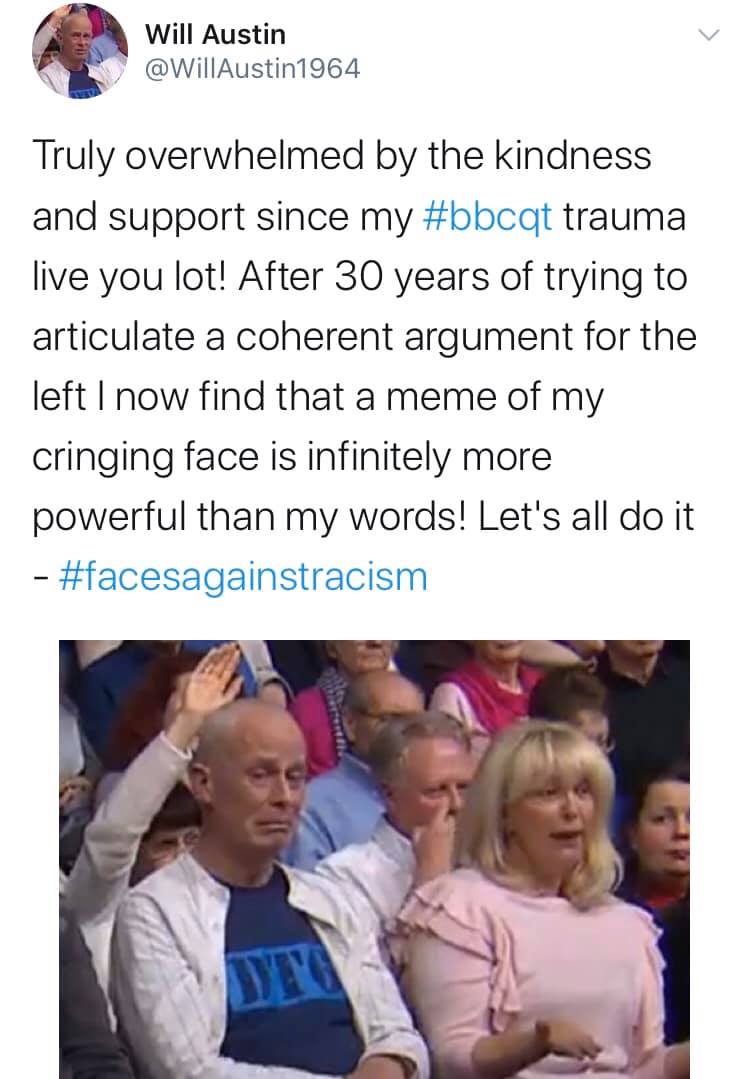 The Tories, especially London Tories, really are desperate to return to the halcyon days of 2012, aren’t they? You know, when the country wasn’t tearing itself apart and the tories weren’t seen as the bunch of lying scumbags they are. I was just on Google looking for something totally unrelated when I came across this two day old Reuters story. Shaun Bailey, the Tory candidate for mayor of London, has suggested that London could host the 2020 Olympics if Tokyo can’t because of coronavirus. He pointed out that all the infrastructure from 2012 still exists; it would just need a bit of work and we would be ready to go again.

I just find that hilariously pathetic. It’s obvious that he’s desperate to take the country back to a time when it was united, happy and glorious, rather than the disunited laughing stock his party turned it into four years later. We all remember that epic summer; Bailey is so urgent to get that time back that he’ll go as far as to make a suggestion as absurd as this. In this insane proposal we can read a party desperate to return to a time when it was respected by a city which now despises it.

The Japanese are, of course, furious at the idea. Tokyo is more than capable of hosting the Olympic Games, having spent seven years preparing for them. If I was from Tokyo, I would be seething at the proposal that London would try to use the current medical emergency as an excuse to steal the games, simply in an attempt to take the edge off their own current political catastrophe. It just goes to show how utterly pathetic the tories are.

After a week without my extended keyboard, it’s now back from being repaired. It feels so good to be able to type properly again. I was having to make do typing via my ipad or the on-screen keyboard using my rollerball, both of which were slow and rather difficult. I suppose one of the hazards of being a disabled guy who relies so heavily on technology is that it tends to go wrong, and when it does, you’re screwed. Yet the key is patience: one has to remember that other people have it far  worse than I do, but still have the fortitude to keep going. If they can do it, so can I. After all, what’s a week of having to type via my Ipad in the grand scheme of things? Mind you, that is unless the zarking Ipad starts playing up too…

The Ill-Informed Ramblings of a Cripple
Blog at WordPress.com.